Greetings from Seville, Spain! We’re arrived here from Granada two days ago, and are having a blast! The weather is nice and toasty at 34 degrees, with clear blue skies!

We wandered around the Maria Luisa park yesterday, and found the amazing Plaza de Espana – see pictures below. This plaza has beautiful tile art of Spain’s military victories, and a fantastic fountain. They even had a Zumba rally going on (a type of exercise based on dance moves). They sure are dedicated – as the weather was 34 degrees!

Checked out the Alcazar today, which was the Moorish palace when the Muslim Empire ruled this area. It was taken over again during the Spanish re-conquest many centuries ago. It has a great mix of Muslim and Christian architecture and art. The gardens around the palace are quite amazing – I got lost and wandered for hours!

We’ll be in Seville until June 5, so we can take our time to enjoy the sites. A few events we have lined up include Flamenco music/dancing, and bullfighting. Should be quite the experience!

On June 5 we’re headed to Morocco! We take the bus to Tariffa, and hop a ferry across the Straits of Gibraltar. Onward and forward to Africa! Until then!

View during my afternoon siesta 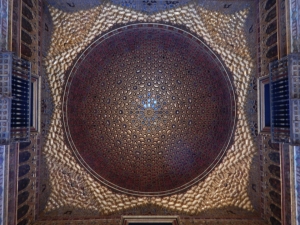 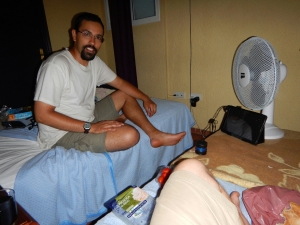 Catching up on Game of Thrones – backpacker style 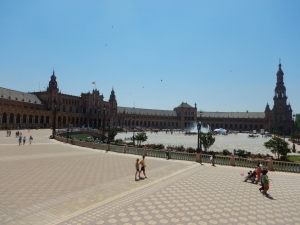