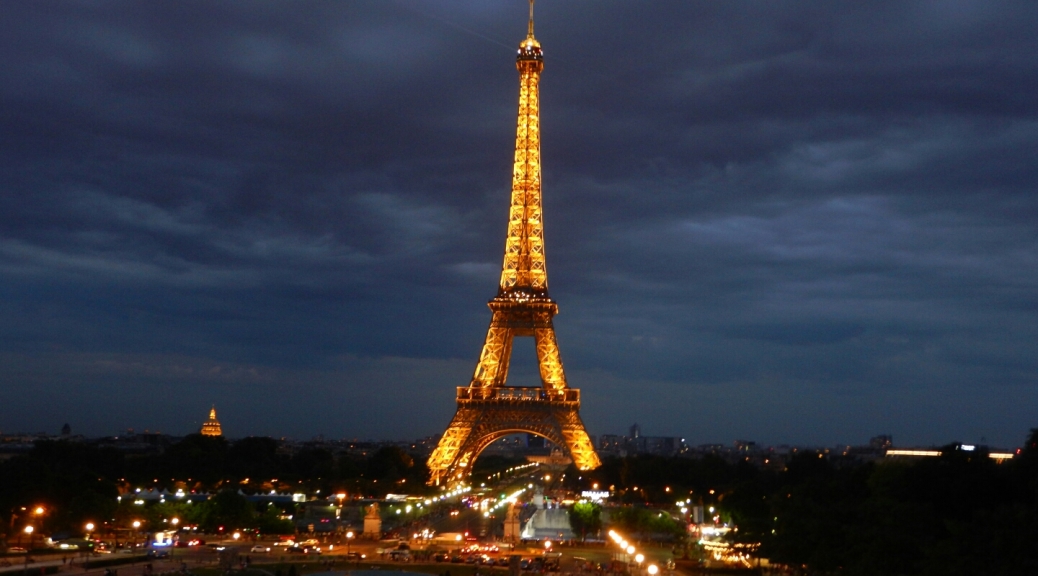 Made it to the enchanting city of Paris! The cheap flights in Europe are really helping the budget! We are staying in a little community in the outskirts of Paris called Malakoff. It has a quaint feel of a smaller town, but is only a 20 minute metro ride to the city centre. I highly recommend staying in Malakoff to my fellow travellers.

On our first evening here, we hopped the metro to the Arc de Triomphe – a grande monument first ordered built by Napoleon over 200 years ago. While walking underneath the arch I had to remember how small I am in the world!

From the Arc we strolled over to the Eiffel Tower – lit up all nicely as it was night time. It’s quite a site seeing the tower in person. An interesting fact – the Eiffel Tower may have the highest concentration of selfie-stick sellers in the world!

On our second day we headed out to the lavish palace and gardens of Versailles. This site was ordered built by King Louis XIV – a king with fine tastes! The extravagence, style, art, and detail of the palace and gardens is exceptional. Check out the photos!

On our third day we checked out the National Museum of Modern Art. The pieces from Dali, Picasso, an many other prominent artists were inspiring. In the afternoon we ran into a street music festival with very colourful music, costume, and dance! Aftewards we took a spin around Notre Dame Cathedral. The French certainly do have style!

On our fourth and final day, we spent a fully packed day exploring the Louvre – a museum with a staggering collection of paintings, sculptures, relics, lavish apartments, and a collection of sphynxs from Egypt! I was quite surprised to see a full room dedicated to an Egyptian pharoh from the 18th dynasty – Akhenaten. He tried to convert Egypt to a monotheist religion – Google him!

My exerience in Paris has been awesome. The Parisians that we’ve met have been very friendly and helpful. Previously I’ve heard that Parisians could be rude or unfriendly. I’m writing to say that this stereotype is not necessarily true. Even though I speak with terribly broken French, my time here has been great – both due to the city and its beautiful people!

Now we’re off to London! Cheers!

One thought on “Paris – enchanting city and friendly Parisians”